We’ve reviewed hard numbers from the SonicWall Capture Labs to provide you with our analysis of for November attack patterns, as well as advice on how to combat the trends we’re seeing in the cybersecurity landscape.

Globally, the SonicWall Capture Threat Network, which includes more than 1 million sensors across the world, recorded the following 2018 year-to-date attack data through November 2018:

Despite nearly two years of dominating cyberattack data and headlines, SonicWall’s threat data for November shows that the number of malware attacks worldwide is on an interesting seasonal decline, particularly given the traditional volume around holiday shopping.

Earlier this year, SonicWall was reporting an average of around 1 billion malware attacks a month. As of November 2018, malware volume was 650 million, 48 percent less than the November 2017 high of 1.2 billion. Malware volume for the year, however, is still up 29 percent year to date.

Ransomware Continues to be a Global Concern

This does not mean that cybercriminals are slowing down. Any slack has been picked up with huge increases in web app attacks and ransomware this year. SonicWall previously covered the holiday-specific ransomware jumps, but the year has also seen some major regional spikes, with a 112 percent year to date increase in the U.S. and a staggering 1,671 percent increase in the Asia Pacific region.

In real numbers, this brings these regions almost level for the year with 124 million attacks in the U.S. compared to 121 million in Asia Pacific.

Encryption is growing at a steady rate: nearly 73 percent of all web traffic monitored by SonicWall is encrypted. Unfortunately, there is a corresponding increase in the number of threats that hide in encrypted traffic. SonicWall data shows a 65 percent increase in encrypted threats compared to 2017.

Even entry-level SonicWall firewalls combat encrypted threats with Deep Packet Inspection of SSL/TLS-encrypted traffic and the latest TZ600P and TZ300P range includes PoE integration to cut down on unnecessary wiring. 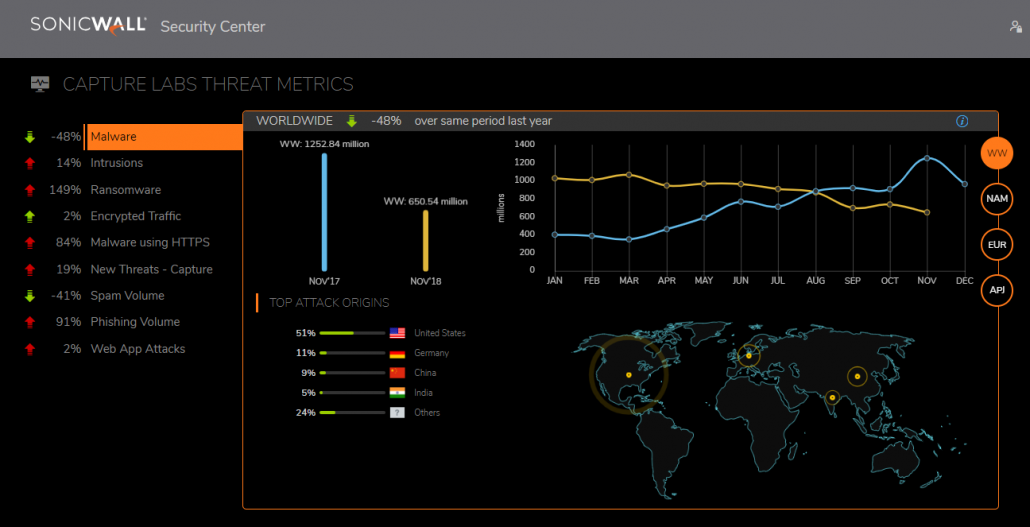 Social Media Manager | SonicWall
John Lynch is a Social Media Manager at SonicWall. He lives in Dublin, Ireland, and has over 10 years worth of web content writing experience. Do ask him how his writing is coming along.
https://d3ik27cqx8s5ub.cloudfront.net/blog/media/uploads/images/featured/Screen-Shot-2018-02-26-at-9.19.29-PM.png 820 2224 John Lynch https://blog.sonicwall.com/wp-content/uploads/images/logo/SonicWall_Registered-Small.png John Lynch2018-12-14 15:30:282019-12-04 20:37:21November Cyber Threat Data: Watch out for Encrypted Attacks
0 replies