SonicWall is thrilled to share that CRN, a brand of The Channel Company, has named three global channel team members on CRN’s 2022 Women of the Channel List. SonicWall’s Sr. Director, Global Field Marketing Nicola Scheibe; Sr. Channel Account Manager Terra Paisley; and Sales Manager Misty Warhola were included on the annual list, which honors the incredible accomplishments of female leaders in the IT channel.

“The recognition of Nicola, Terra and Misty is a reflection of their commitment to our partner network and demonstrates the breadth and depth of talent at SonicWall,” said SonicWall Vice President, North America Channel Sales HoJin Kim. “I am grateful to CRN for recognizing their outstanding contributions, as these leaders have been integral in driving our channel expansion over the last several years.”

By bringing innovative concepts, strategic business planning and comprehensive channel initiatives to life, these extraordinary women support partners and customers with exceptional leadership. CRN celebrates these women, who are so deserving of recognition, for their constant dedication to channel excellence.

“We are proud to once again recognize the remarkable leaders on this year’s Women of the Channel list. Their influence, confidence and diligence continue to accelerate channel success significantly,” said Blaine Raddon, CEO of The Channel Company. “Their accomplishments will inspire others, and we look forward to witnessing their future contributions to the channel.”

Those named on this annual list come from all corners of the IT channel — including vendors, distributors and solution providers whose vision, expertise and contributions make an impact on the industry every day.

CRN’s 2022 Women of the Channel list will be featured in the June issue of CRN Magazine and online at www.CRN.com/WOTC.

Starting in Q1 2021, SonicWall Capture ATP has found 100% of malicious threats in quarterly test rounds without issuing a single false positive. This means that for 160 days of continuous testing, consisting of 6,719 total test runs, SonicWall Capture ATP found all 3,131 malicious samples — the majority of which were four hours old or less. And it did so without misidentifying a single one of the 3,588 innocuous apps scattered throughout.

“SonicWall has now received an amazing five consecutive perfect scores when tested against some of the most unknown and rigorous threats — an unprecedented achievement among tested vendors,” said SonicWall President and CEO Bill Conner. “These third-party, real-world tests validate SonicWall as a clear leader in the cybersecurity space and play a significant role in our efforts to deliver quality-driven security products.”

As the latest in a streak of perfect scores, SonicWall’s Q1 2022 test results reflect not only excellence, but also consistency. From Jan. 19 through Feb. 19, 2022, a SonicWall NSa 3600 next-generation firewall equipped with Capture ATP and patented RTDMI™ technology was once again put through its paces. And once again, it correctly identified all 553 of the malicious samples (100% detection rate) without alerting on any of the 578 innocuous apps (0% false positive rate).

Eligible security vendors are tested quarterly for a minimum of three weeks. During that time, ICSA Labs subjects the vendors’ advanced threat solutions to hundreds of test runs consisting of a mixture of innocuous applications, new threats and little-known threats. These threats are delivered via the primary vectors that lead to enterprise breaches, according to Verizon’s Data Breach Investigations Report. The test cycles evaluate how good vendor ATD solutions are at detecting unknown and little-known threats — and whether they can do so while minimizing false positives.

The continued success of SonicWall Capture ATP with RTDMI is due to two main factors: the solution’s ability to identify even the most sophisticated and obfuscated threats, and its ability to use what it learns doing so to improve itself over time.

And since RTDMI can detect malicious code or data in memory and in real time during execution, no malicious system behavior is necessary for detection. In other words, the presence of malicious code can be identified prior to any malicious behavior taking place, allowing for a quicker verdict.

Best of all, because it incorporates AI and machine learning technologies, RTDMI™ is continuously becoming more efficient and effective.

In 2021, the technology identified a total of 442,151 never-before-seen malware variants, a 65% increase over 2020’s count. And while 2022 numbers have not yet been tallied, in 14 of the last 16 quarters through the end of 2021, the number of new malware variants identified has exceeded that found in the previous quarter.

“In today’s fast-moving and unpredictable threat landscape, it is really hard to earn consistent third-party validation,” said SonicWall Vice President of Software Engineering & Threat Research Alex Dubrovsky. “Our five consecutive perfect scores are a confirmation of our vision and a significant milestone to the SonicWall team’s dedication to providing organizations with the very best threat intelligence technology.” 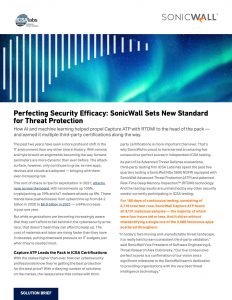 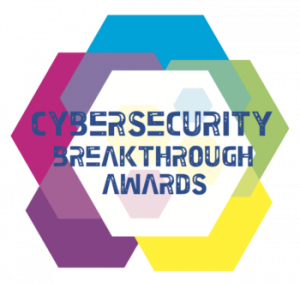 CyberSecurity Breakthrough judges are experienced senior-level cybersecurity professionals who have personally worked within the information security space, including journalists, analysts and technology executives with experience in a range of information security positions and perspectives. From successful technology startups to veteran industry leaders, the panel of judges brings a balanced perspective of evaluation for the award nominations.

The judges have earned a reputation for fairness and credibility, and are committed to determining the break through nominations for each award category, which includes:

In 2017, SonicWall was named the Cybersecurity Breakthrough Overall Cybersecurity Company of the Year. More than 2,000 nominations from over 12 different countries throughout the world competed for the honor.

Once again, SonicWall Email Security has been recognized at the top of its class for protecting the No. 1 threat vector: email. The solution was named the overall winner by sweeping the 2018 CRN Annual Report Card (ARC) email security category.

The solution has won three prestigious security awards to date in 2018. This is a testament toward the innovation and effort the SonicWall team has invested the last 18 months in key focus areas: advanced threat protection, administrative ease, product support and channel enablement. 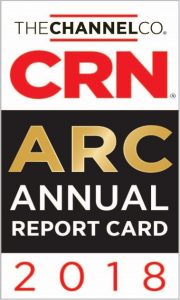 “An ARC award is one of the industry’s most prestigious honors. It symbolizes a vendor’s dedication to delivering high quality and innovative product and program offerings to their channel partners,” said Bob Skelley, CEO, The Channel Company. “CRN’s Annual Report Card provides solution providers with the rare opportunity to offer their invaluable insight on vendors’ products and services, as well as their partner programs. As a result, the technology suppliers are equipped with actionable feedback to bolster their efforts to remain the best-of-the-best.”

The Annual Report Card summarizes results from a comprehensive survey that details solution provider satisfaction across product innovation, support and partnership for hardware, services and software vendors. The vendors with the highest ratings are named to the prestigious Annual Report Card list of winners and celebrated as best-in-class by their partners.

The results also provide the IT vendor community with valuable feedback — directly from their solution providers — that can be used to refine product offerings, enhance support and improve communication with partners.

This year’s group of honorees was selected from the results of an in-depth, invitation-only survey by The Channel Company’s research team. More than 3,000 solution providers were asked to evaluate their satisfaction with more than 65 vendor partners in 24 major product categories.

SonicWall Email Security is a multi-layer solution that protects organizations against advanced email threats such as targeted phishing attacks, ransomware and business email compromise. The key capabilities include: 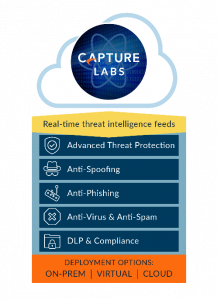 The solution can be deployed as hardened physical appliances, robust virtual appliances or a resilient cloud email security service. And whether an organization uses on-premises email servers or cloud services, such as Microsoft Office 365 or Google G Suite, SonicWall’s solution delivers best-in-class threat protection through seamless and simple integrations.

Given that email continues to be a top attack vector in the cyber arms race, SonicWall is committed to enhancing the solution to better protect its users from advanced email threats.

The 2018 Annual Report Card results can be viewed online at www.crn.com/arc.

SonicWall is proud to announce it has garnered seven awards, including three from the Network Products Guide IT World Awards, two from the Globee Awards, and one each from the PR World Awards and the CEO World Awards.

With these seven new accolades, SonicWall has earned more than 30 awards so far in 2018.

First from the Network Products Guide IT World Awards is a gold award in the ‘Firewalls’ category for the SonicWall NSA 2650 firewall. The SonicWall NSa 2650 is a next-generation firewall that delivers high-speed threat prevention over thousands of encrypted and unencrypted connections to mid-sized organizations and distributed enterprises.

In addition to the awards from Network Products Guide, SonicWall also garnered a silver award in the ‘PR Achievement of the Year’ category from the PR World Awards for the launch of the 2018 SonicWall Cyber Threat Report. The annual report is the go-to source for cyber threat intelligence, industry analysis and cyber security guidance for the global cyber arms race.

Finally, SonicWall CEO Bill Conner won silver in the ‘CEO Excellence of the Year’ award for organizations with 500-2,499 employees.

Today CRN, a brand of The Channel Company, has named SonicWall to its annual Security 100 list.

This project recognizes the coolest security vendors in each of five categories: Endpoint Security; Identity Management and Data Protection; Network Security; SIEM and Security Analytics; and Web, Email and Application Security. The companies on CRN’s Security 100 list have demonstrated creativity and innovation in product development as well as a strong commitment to delivering those offerings through a vibrant channel of solution providers.

In addition to recognizing security technology vendors for outstanding products and services, the Security 100 list serves as a valuable guide for solution providers trying to navigate the IT security market. The list aids prospective channel partners in identifying the vendors that can best help them improve or expand their security offerings.

“The core elements of today’s businesses, both large and small, depend upon robust and reliable cybersecurity solutions,” said Bob Skelley, CEO of The Channel Company. “Unprecedented streams of data, the sweeping transition to cloud computing, vast networks of wireless systems, the rapidly growing Internet of Things—all these advances necessitate increasingly complex and adaptive security measures. CRN’s 2018 Security 100 list recognizes top vendors that are meeting this extraordinary demand with the most innovative security technologies on the market, enabling businesses to grow uninterrupted.”

This announcement comes just 24 hours ahead of the launch of the 2018 SonicWall Cyber Threat Report. This premier cyber security industry report puts you a step ahead of cyber criminals in the global cyber war, empowering you with proprietary security data, global knowledge and latest trends, gathered and analyzed by our leading-edge SonicWall Capture Labs Threat Network. The 2018 Cyber Threat Report is available on March 6.

The Security 100 list will be featured in the April 2018 issue of CRN and online at www.crn.com/security100.