For many years, the goal of cybersecurity was relatively simple: shield enterprise networks and connected assets from known malicious threats. But as we’ve learned, protection from known threats is not enough.

Our mid-year update to the 2021 SonicWall Cyber Threat Report showed that existing cybersecurity methods are under direct attack by highly organized hackers and scammers. The report presented such eye-popping data that it was a widely quoted source by the news media, including the Wall Street Journal, PBS News Hour, and CNN. Data from our study even found its way into proposed legislation in the U.S. Senate.

The new challenge is defending networks against new or little-known threats without hampering network performance. Unfortunately, while many protection products and services promise they’re up to the task, only a few are proven to do so – until now.

ICSA Labs just released the latest result from their coveted Advanced Threat Defense report – the same report that so many IT managers look to help them strengthen their network frontiers. In this report, SonicWall’s Capture ATP (Advanced Threat Protection) was the only solution to receive a perfect score. This is the third time that SonicWall has received a perfect score in this category. It also marks the seventh consecutive ICSA certification for SonicWall Capture ATP.

It is rare for any security solution to receive a perfect score, let alone earn three in series. However, Capture ATP uses patented RTDMITM (Real-Time Deep Memory Inspection) technology designed to do one thing: surpass expectations. In our own tests, the technology catches more malware faster than traditional behavior-based sandboxing methods, with a lower false-positive rate. ICSA Labs test results qualify the success of this design.

According to the report, “SonicWall Capture ATP did remarkably well during this test cycle-detecting 100% of previously unknown threats while having zero false positives,” proving the effectiveness of the solution against unknown threats. 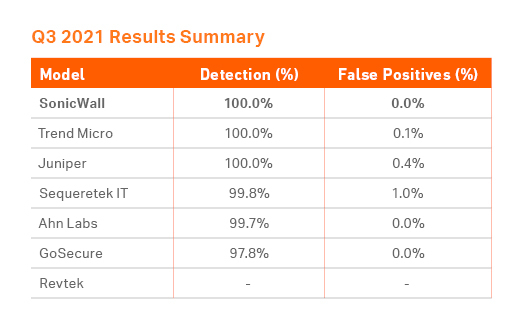 Times Such as These…

ICSA Labs ATD Certification takes direct aim at the weakest link in traditional cybersecurity models: the nexus point where unknown and little-known threats can do the most damage. But, if our Cyber Threat Report is any evidence, we live in times when tests such as what organizations like ICSA Labs offer are necessary.

Through third-party testing, network managers can learn how well protections work in realistic environments. SonicWall submits products such as Capture ATP to lab testing because we also want to see a third-party validation of our engineering. Programs such as ICSA Labs ATD Certification are vital if we make cybersecurity an actual priority, not just a marketing promise.

What is ICSA Advanced Threat Defense?

Executive Director of Product Marketing | SonicWall
Kayvon is the Executive Director of Product Marketing at SonicWall. With over 20 years of experience in cybersecurity, he brings a unique blend of technology, marketing and business insight to his role. Kayvon has a master’s degree in computer science from American University, and an MBA from Indiana University.
https://d3ik27cqx8s5ub.cloudfront.net/blog/media/uploads/Image-1-Capture-ATP-Lab-Report-Blog-1200x500-1.jpg 500 1200 Kayvon Sadeghi https://blog.sonicwall.com/wp-content/uploads/images/logo/SonicWall_Registered-Small.png Kayvon Sadeghi2021-10-18 09:57:322021-10-20 08:45:33SonicWall Earns Its Third Perfect Score In A Row From ICSA Labs
0 replies