As the ‘Year of Ransomware’ roars on, SonicWall observes 3rd Quarter with another unprecedented, record-breaking surge in attacks.

In July 2021, SonicWall released its widely quoted Mid-Year Update to the 2021 SonicWall Cyber Threat Report with alarming news of the sharp rise in ransomware and other malicious attacks. We’re back again with more data and a message: ransomware’s rise has not slowed. 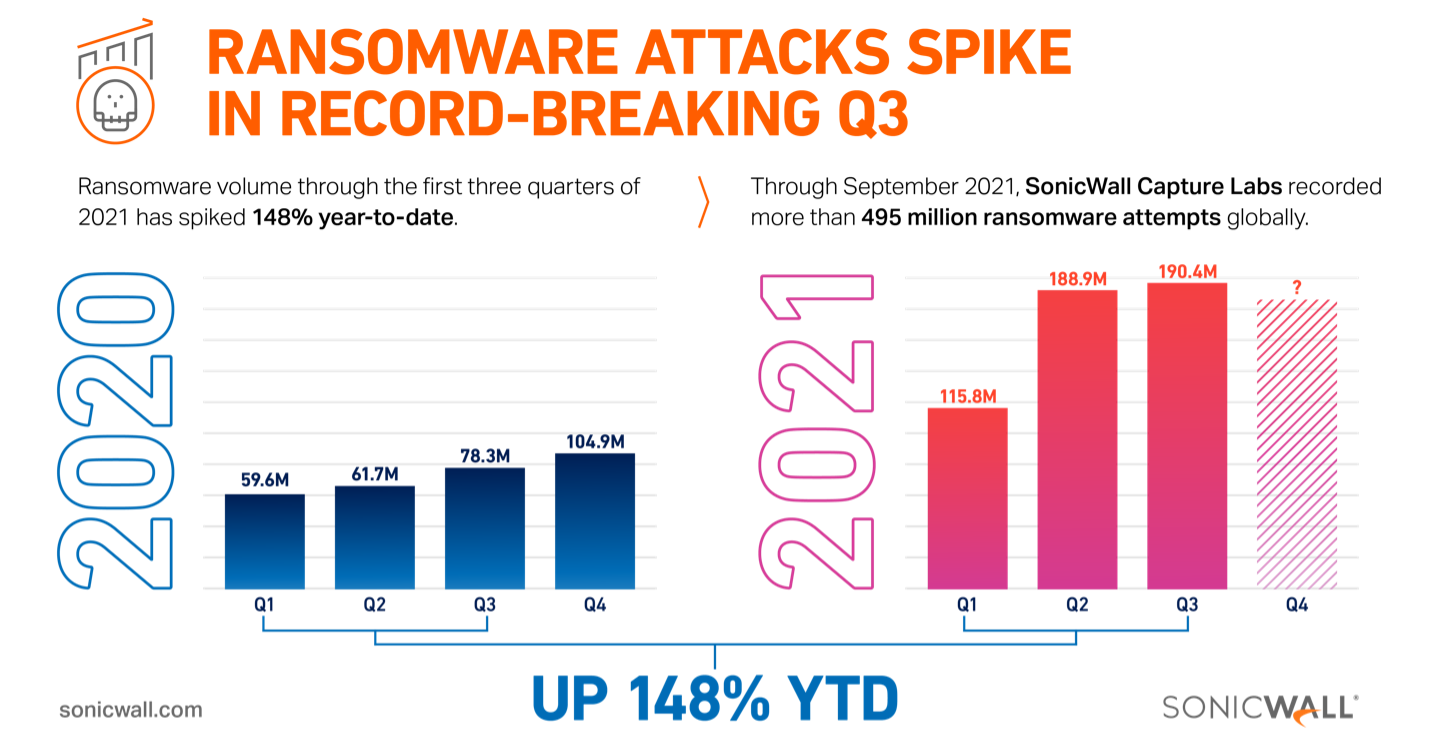 “As we see it, ransomware is on a nearly unimaginable upward trend, which poses a major risk to businesses, service providers, governments and everyday citizens,” SonicWall President and CEO Bill Conner said in the official release.

Despite movements to secure cyber infrastructures from respective national governments, the U.K. has seen a 233% surge in the number of ransomware attacks, and the U.S. has witnessed a 127% year-to-date increase.

The sheer volume of attacks illicit words like “global crisis,” “ruthless,” and “a significant national security threat.” Yet, many people appear to be determined to restore a sense of normalcy while this severe global crisis roils on.

“Cybercriminals have never let up, driving ransomware campaigns to record numbers through the first three quarters of 2021,” said Conner. “These criminal organizations will continue to launch highly sophisticated cyberattacks that are designed to target organizations and business with weak or lax security controls.”

A summary of SonicWall Q3 2021 findings:

Amid the stats, there is another reason for concern: SonicWall Real-Time Deep Memory InspectionTM discovered 307,516 never-before-seen malware variants during the first three quarters of 2021 — a 73% year-to-date increase. That’s an average of 1,126 new malware variants discovered each day in 2021.

The rise in variants points to maturation in cybercriminals ability to rapidly diversify the tactics they use to attack organizations, their networks and their users. Coupled with a constant flood of cyberattacks, businesses and individuals will find it increasingly difficult to protect themselves with old or expired cybersecurity technology.

The Grace Period Has Come to an End

“The real-world damage caused by these attacks is beyond anecdotal at this point. It’s a serious national and global problem that has already taken a toll on businesses and governments everywhere,” said Conner.

With a predicted 714 million ransomware attacks by the end of the year, the grace period for companies and individuals to increase their protections and change their behavior has come to an abrupt end.