2020 has brought exponential growth in network traffic, including a 25% to 35% spike in March alone. As the demands on network firewalls continue to increase, many have struggled to keep up without becoming a bottleneck. Meanwhile, cybercriminals are becoming increasingly successful at breaching perimeter defenses using advanced techniques like encrypted threats and embedded malware.

To address this changing cybersecurity landscape, some companies have deployed multiple security point products. According to CSO Online, enterprises have an average of 75 products deployed to secure their network and cloud infrastructure. But these disparate point products pose challenges of their own, including management complexity and lack of interoperability — which in turn have led to an explosion in overall operating costs.

Today’s enterprises need a next-generation firewall that can accommodate the continuing increase in network traffic, while at the same time consolidating security controls to stop evasive threats.

SonicWall NSa 2700 includes advanced networking features such as HA/clustering, SD-WAN, dynamic routing, and virtual routing and forwarding. It combines validated security effectiveness and best-in-class price performance in a single rack unit appliance with high port density. In short, medium enterprises can now get the performance, networking and security capabilities they need from their next-generation firewalls without breaking the bank.

Appliance at a glance

NSa 2700 is an energy-efficient, reliable appliance in a compact 1U chassis. Powered by the next-generation SonicOS 7.0 operating system, it is capable of processing millions of connections while delivering multi-gigabit threat prevention throughput. The following are a few high-level features that make NSa 2700 an attractive option for medium and distributed enterprises:

Powered by the new SonicOS 7.0

The SonicWall NSa 2700 runs on SonicOS 7.0, a new operating system built from the ground up to deliver a modern user interface, intuitive workflows and user-first design principles. SonicOS 7.0 provides multiple features designed to facilitate enterprise-level workflows, easy configuration, and simplified and flexible management — all of which allow enterprises to improve both their security and operational efficiency.

More details about the new SonicOS 7.0 can be found here.

In this standard deployment option, SonicWall NSa 2700 protects private networks from malicious traffic coming from the Internet, allowing you to: 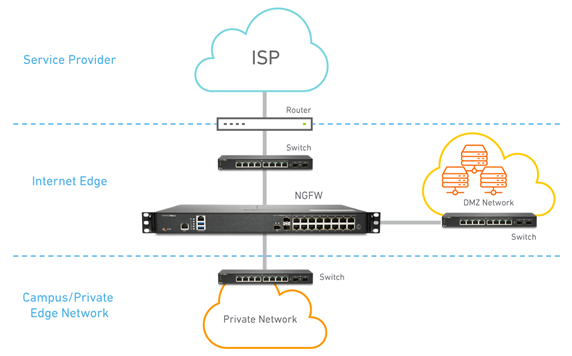 The SonicWall NSa 2700 supports SD-WAN and can be centrally managed, making it an ideal fit for medium and distributed enterprises. By leveraging NSa’s high port density, which includes 10 GbE connectivity, enterprises can support distributed branches and wide area networks. This deployment allows organizations to:

To learn more about the new NSa 2700, watch the video or click here.