The pair took to the airwaves (and podcast) to focus on emerging cyber threats that impact enterprises, SMBs and federal agencies alike. Atop the list were attacks over non-standard ports, encrypted threats and malicious PDFs and Office files.

“What’s alarming on this one, these new techniques are evading traditional security sandboxes,” Conner told Gilroy on the show. 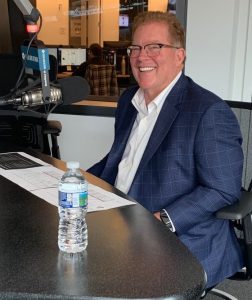 “It’s incredibly aggressive in terms of the volume. It’s also very evasive,” said Conner on the broadcast. “If you click on that PDF, it might not hit you immediately. It might be delayed before it activates itself. The alarming piece in this city (Washington D.C) — for the Feds — is that it is emanating out of Russia.”

The compelling 40-minute segment, which is available via podcast, also explored the growing volume of IoT attacks, fileless malware and other evolving exploits.

“It’s a cyber arms race,” said Conner. “As many good guys as we have coding to block it and stop it, you’ve got an equal number of bad guys on the other side looking for architecture or feature holes trying to get around [security controls].”

Federal Tech Talk looks at the world of high technology in the federal government. Host John Gilroy of The Oakmont Group speaks the language of federal CISOs, CIOs and CTOs, and gets into the specifics for government IT systems integrators. John covers the latest government initiatives and technology news for the federal IT manager and government contractor.

Dragonblood Vulnerability: Is your WiFi secure?