How do you know if cryptojacking is impacting your business? Learn how to spot infections and how to deploy solutions to protect your network and endpoints.

The good news for cryptocurrency is that the model is an established fixture in global finances. It’s highly portable, holds value, is tradable for products and services, and is gaining popularity among mainstream consumers.

It can also be a rewarding investment tool if you’re truly adventurous. Of course, fortunes are won and lost in a wink as many cryptocurrency issues (e.g., Bitcoin, Ethereum, Cardano) are highly volatile, with values sometimes soaring to astronomical highs and plummeting into white-knuckle lows within days or weeks. However, there are other less scary ways to make money from cryptocurrencies, and one of them is through “cryptomining.”

What is Cryptomining: An Explainer

Cryptomining is a process that validates cryptocurrency transactions in distributed public ledgers. Each transaction is linked to the previous and subsequent transaction, creating a chain of time-stamped records. This is essentially what a “blockchain” is all about.

One of the advantages of cryptomining is that just about anyone can participate without investing in the currency. For example, if you mine for Bitcoin, you receive Bitcoin as compensation for completing blocks of verified transactions added to the blockchain. It takes about 10 minutes to process a single block of currency.

All you need is a little knowledge about connecting to the cryptocurrency network, a reliable connection to the internet, one or two decent servers, and a steady power supply. The more server power you can enlist for your legitimate cryptomining operation, the more blocks you can process and the more money you make.

But there’s a twist to this process, and this is where the bad news comes in. Miners only earn cash when they complete the data process faster than others, and there are literally hundreds of miners trying to process the same block simultaneously. For that reason, miners are constantly looking for ways to scale up their hashrate (a metric for computational power to process blocks). The more hashes produced each second, potentially the more money you make.

Some people dodge the legitimate process entirely and turn to “cryptojacking.”

Why Cryptojacking is a rising threat.

It’s pretty simple: cryptojacking is cryptomining, but now the miner is using someone else’s computer without permission. Victims usually have no idea that their computers have been pressed into this kind of use, often through malware introduced by phishing or other hack.

In April 2018, SonicWall started tracking cryptojacking trends. Back then, the company recorded nearly 60 million cryptojacking attacks in one year. But as reported in the 2022 SonicWall Cyber Threat Report, cryptocurrency prices hit new highs in 2021, and with it, hacking incidents soared to 97 million, increasing nearly 62% since 2018. 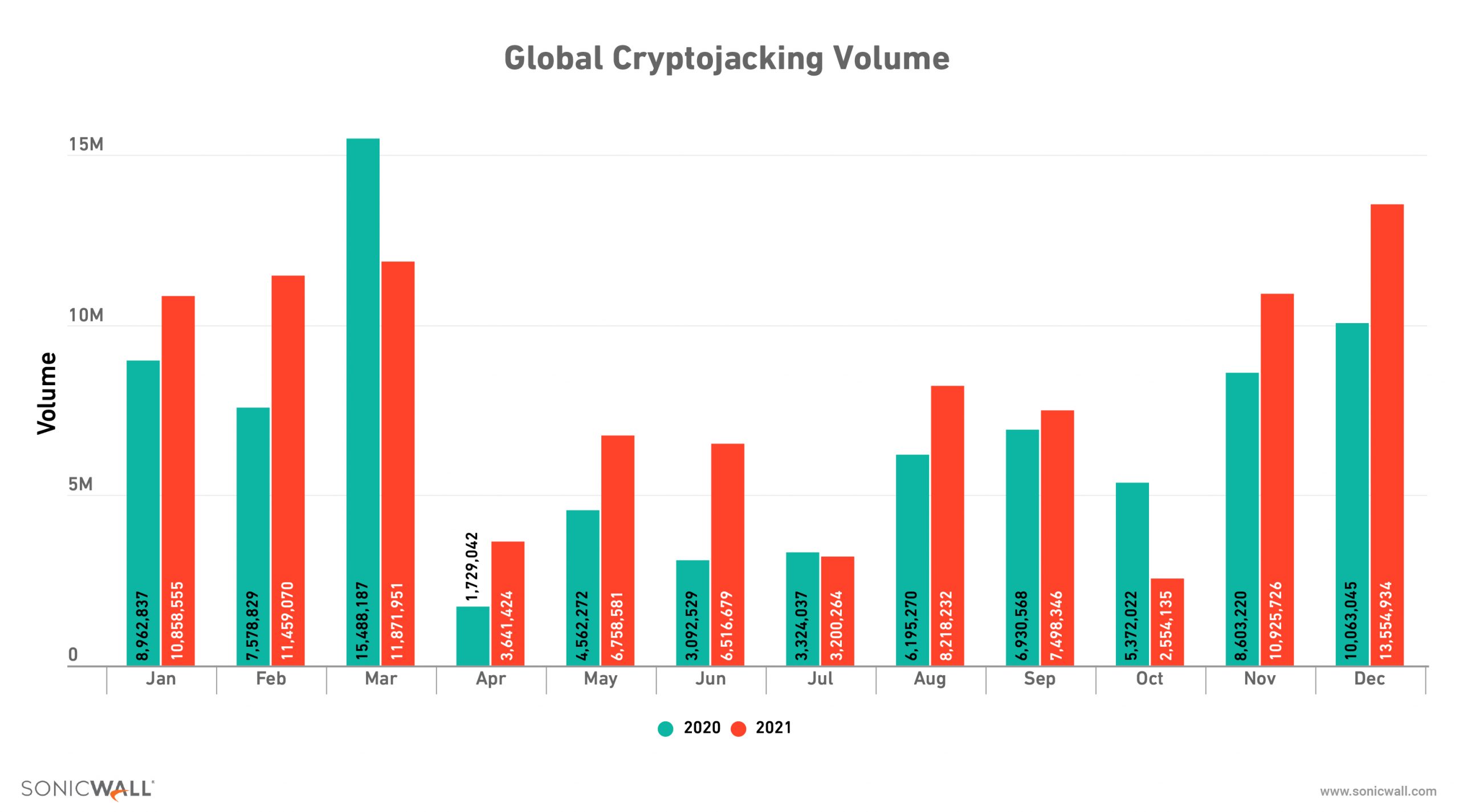 Unlike ransomware which relies on the visibility of phishing emails and messages, cryptojackers do their work invisibly in the background. The only sign your network or devices are affected is by monitoring a CPU performance graph or noticing that a device fan is running harder than usual.

Over the last two years, we’ve noticed that ransomware teams tend to switch to other activities like cryptojacking. One apparent reason they change is that the return on investment for a ransomware scheme and strain (that took months of development work) diminishes when it ends up on public feeds like VirusTotal.

Like anyone else running a profitable business, cybercriminals tend to be agile and flexible about their work. As a result, they’re actively searching for different ways to fulfill their financial targets. Cryptojacking offers agility thanks to the relative ease operators can deploy it with other criminal activity.

The allure of cryptomining.

With such low cost and practically zero risks, cybercriminals see many strong incentives to engage in cryptomining as a base business model. Much of the operation itself is automated through software. However, volatility in cryptocurrency plus rising energy costs is putting a lot of pressure on miners. In 2018, legitimate crypto miners could earn $100/day, but that profit has been halved nowadays, and staying “legit” is more complicated and harder to do.

Consequently, according to SonicWall’s threat report, illegal cryptojacking is again on the rise. The first quarter of 2021 saw 34.2 million hits in cryptojacking, making it the highest quarter since SonicWall began tracking this data point. But more worryingly, the worst month for cryptojacking in 2021 was, by far, December, with 13.6 million recorded. While December 2021 doesn’t eclipse the 15.5 million hits observed in March 2020, it makes for an easy second place, which was, by any comparison, a suboptimal starting point for 2022.

Am I infected by cryptojacking malware?

Cryptominers are interested in your processing power, and cryptojackers must trade stealth against profit. So how much of your CPU resources they take depends on their objectives.

Siphoning less power makes it harder for unsuspecting users to notice; stealing more increases their profits. Of course, there will be a performance impact in either case, but if the threshold is low enough, it could be challenging to distinguish the miner from legitimate software.

Enterprise administrators may look for unknown processes in their environment, and end-users of Windows software should start a Sysinternals Process Explorer to see what they are running. Linux and macOS users should investigate using System Monitor and Activity Monitor, respectively, for the same reason.

How to defend against malicious cryptojackers.

The first step in defending against cryptominers is to stop this type of malware at the gateway through firewalls or email security (perimeter security), which is one of the best ways to scrub out known file-based threats.

Since people like to reuse old code, catching cryptojackers is relatively simple. However, SonicWall predicts there will still be a surge in new cryptojacking variants and techniques as cryptojackers have time to develop more tools. In addition, cryptojacking could still become a favorite method for malicious actors because of its concealment; low and indirect damage to victims reduces chances of exposure and extends the useful lifespan of a successful attack.

If the malware strain is unknown (new or updated), it will bypass static filters in perimeter security. If a file is unknown, it will be routed to a sandbox to inspect the nature of the file.

The multi-engine SonicWall Capture Advanced Threat Protection (ATP) equipped with Real-Time (RTDMI)™ is proven to be highly effective in preventing evasive malware that may evade one engine but not the others.

If you have an endpoint not behind this typical setup (e.g., it’s roaming at the airport or hotel), you need to deploy an endpoint security product that includes behavioral detection.

Behavioral-based cybersecurity solutions like Capture Client ATP can detect malware that allows cryptomining and shut down the operation. Then, an administrator can quickly quarantine and delete the malware or, in the case of hacks that have done damage to system files, roll the system back to the last known good state before the malware was executed.

By combining a mixture of perimeter defenses and behavioral analysis, organizations can fight the newest malware forms no matter the trend or intent.