2021 has already been a record-setting year for cybercrime — and it’s only halfway over. While high-profile attacks such as Colonial Pipeline and Kaseya continue making headlines, businesses of all sizes, across all industries, are noting an increase in cybercrime.

Part of this increase can be attributed to new ransomware techniques, soaring cryptocurrency prices and the continued rise in IoT devices. But a big factor continues to be today’s shifting and distributed IT landscape, which has proven a uniquely enticing environment for launching a variety of attacks.

“In a year driven by anxiety and uncertainty, cybercriminals have continued to accelerate attacks against innocent people and vulnerable institutions,” SonicWall President and CEO Bill Conner said in the official announcement. “The latest data shows that sophisticated threat actors are tirelessly adapting their tactics and embracing ransomware to reap financial gain and sow discord.”

This data, collected by SonicWall Capture Labs threat researchers over the first six months of 2021, is now available in the Mid-Year Update to the 2021 SonicWall Cyber Threat Report —  which arms organizations with actionable threat intelligence to safeguard workforces in today’s business reality. Here are some of the highlights: 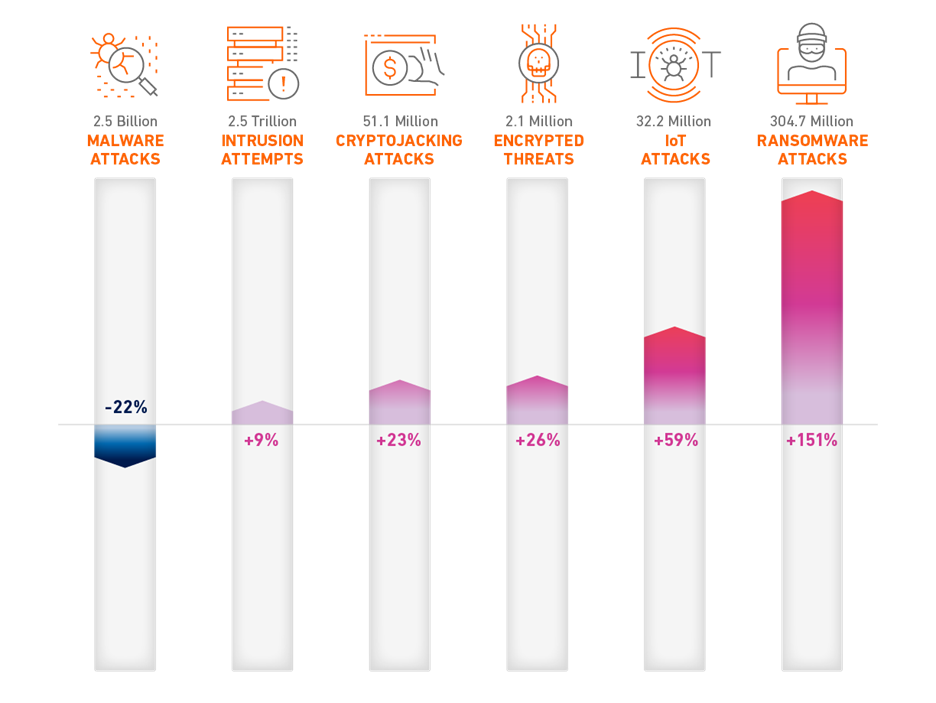 Ransomware was already high going into 2021, but it’s up significantly since then, with attacks increasing a staggering 151% over the first half of last year. April, May and June each saw levels high enough to hit all-time records, and attacks are showing no sign of slowing down. By June 30, SonicWall had recorded 304.7 million ransomware attacks globally — more than the 304.6 million we saw over the entire year of 2020.

The bad news: Cyberattacks are getting more effective. The good news: Defense methods are getting better too, and in the case of SonicWall’s patented Real-Time Deep Memory Inspection™ (RTDMI), they’re improving dramatically. Included with the Capture Advanced Threat Protection sandbox service, this technology discovered 185,945 never-before-seen malware variants in the first half of 2021, a 54% year-to-date increase. By leveraging machine learning, RTDMI has become highly effective at identifying new and advanced threats, contributing to a perfect score in the last two cycles of ICSA Advanced Threat Defense (ATD) testing.

With the number of IoT devices projected to rise from 13.8 billion today to 30.9 billion in 2025 — and with security standards remaining shockingly lax — cybercriminals are increasingly focusing on IoT attacks. In the first half of 2021, SonicWall threat researchers recorded 32.2 million IoT malware attempts, a jump of 59% year to date.

Malware Falls by Nearly a Quarter

So far in 2021, malware has fallen 22% year to date, as the decline of “spray-and-pray” malware continues to impact overall volume. With the speed and magnitude of changes impacting the threat landscape — from the preferred methods of attack to who’s being targeted — it’s never been more important to stay updated on the risks of today … or prepare for the risks of tomorrow.

“With remote working still widespread, businesses continue to be highly exposed to risk, and criminals are acutely aware of uncertainty across the cyber landscape,” Conner said. “It’s crucial that organizations move toward a modern Boundless Cybersecurity approach to protect against both known and unknown threats, particularly when everyone is more remote, more mobile and less secure than ever.”

Download the mid-year update to the 2021 SonicWall Cyber Threat Report for your exclusive look at how cybercriminals are operating so far in 2021 — including which attack types are trending, what techniques are being developed and who’s being targeted.

Senior Digital Copywriter | SonicWall
Amber Wolff is the Senior Digital Copywriter for SonicWall. Prior to joining the SonicWall team, Amber was a cybersecurity blogger and content creator, covering a wide variety of products and topics surrounding enterprise security. She spent the earlier part of her career in advertising, where she wrote and edited for a number of national clients.
https://d3ik27cqx8s5ub.cloudfront.net/blog/media/uploads/Mid-Year-TR-Resource-Center-Teaser-970x720-1.jpg 720 960 Amber Wolff https://blog.sonicwall.com/wp-content/uploads/images/logo/SonicWall_Registered-Small.png Amber Wolff2021-07-29 04:25:262021-07-29 04:25:26Latest Cyber Threat Intelligence Shows Ransomware Skyrocketing
0 replies