We live in a nation preoccupied with the setting of new records. But while many records are newsworthy, not all of this news is good news. Two examples that have recently made headlines: the mid-June heatwave that has shattered temperature records all over the American West, and the unprecedented wave of ransomware attacks currently torching networks … well, just about everywhere.

“Through May, SonicWall recorded 226.3 million ransomware attacks, a 116% year-to-date increase over 2020, indicating cybercriminals’ rapidly evolving and highly profitable attack tactics,” said SonicWall President and CEO Bill Conner. “In fact, May 2021 was victim to the highest number of ransomware attacks we have ever recorded.” 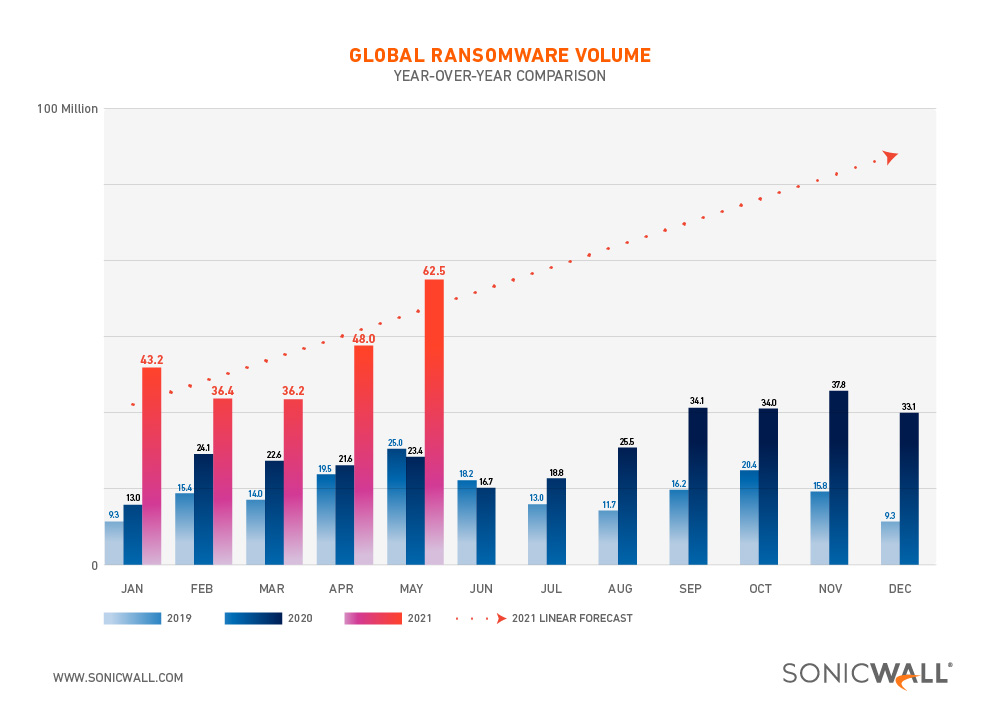 Since the beginning of the year, it seems that 2020’s perfect storm for cybercrime in general, and ransomware in particular, has only grown in intensity. On the heels of its late 2020 performance, itself record-breaking, Bitcoin continued thundering on into 2021, reaching a new high in each of the first four months of this year.

Around the world, fortunes were being made on cryptocurrency. And ransomware, its barriers to entry lower than ever due to readily available hacking tools and platforms such as Discord, attracted an increasing number of cybercriminals looking for a quick, easy way to obtain the bitcoin that could make their fortunes. 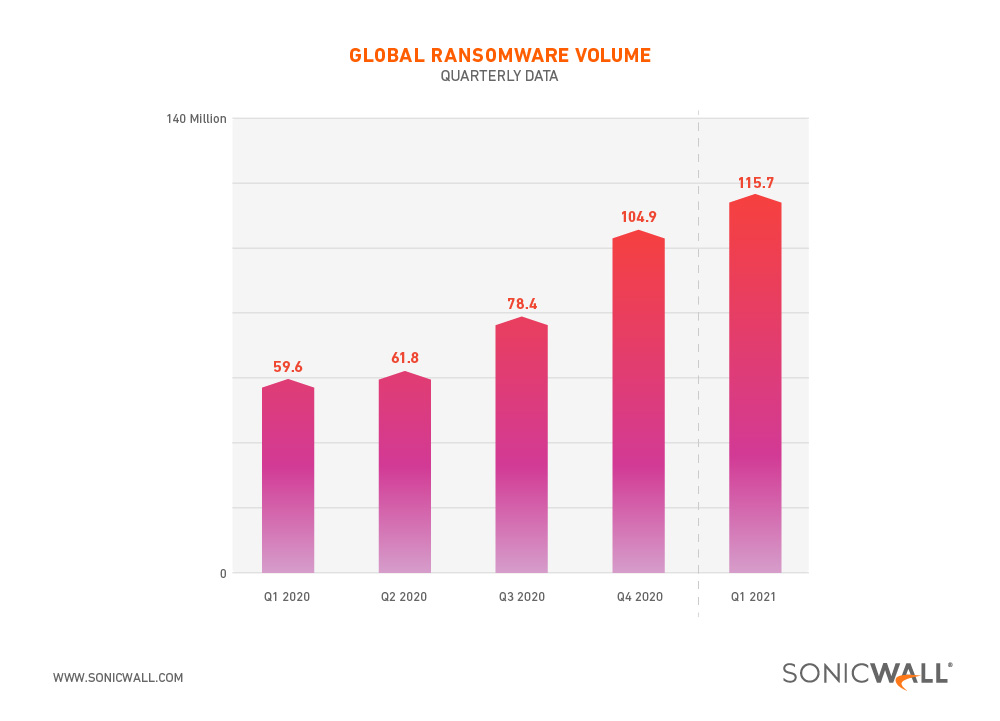 Unfortunately, in this storm, victims are finding that lightning strikes the same place twice with frightening regularity. Companies eager to move past increasingly sophisticated and debilitating ransomware attacks, and often sheltered by high-dollar ransomware insurance policies, too often pay the ransom — only to be targeted again shortly after.

According to ZDNet, roughly eight in 10 organizations that paid ransom demands were subsequently attacked again, with nearly half of these victims saying they believe the second attack was perpetrated by the same criminals as the first.

And these criminals are continuing their shift toward soft targets, including hospitals, utilities, schools and government agencies. In early March, Broward County School District in Fort Lauderdale, Fla., set its own record when it received a $40 million ransom demand — the highest ever for an educational institution.

And in May, the Colonial Pipeline ransomware attack brought one of the nation’s largest fuel transportation networks to a standstill for nearly a week, leading to fuel shortages and panic buying.

“Law enforcement agencies and political figures continue to voice opinions that constantly contradict each other on how best to fight adversaries that know no boundaries, do not adhere to international laws and are far from the charitable operators they claim to be,” Conner said. “The volume of targeted attacks on government organizations and enterprises that impact civilians, countries and the global economy will not end without a change in approach.”

But many countries — particularly those that have been hardest hit by ransomware, such as the U.S. and the U.K. — are mobilizing to fight back. With ransomware attacks now elevated to a matter of national security, increased funding for fighting cybercrime and penalties at the national level for countries that harbor ransomware groups could finally begin to turn the tide.

To find out which areas have been most impacted by 2021’s record ransomware — and whether the current flood of ransomware will rise to set new records in June and beyond — stay tuned for the mid-year update to the 2021 SonicWall Cyber Threat Report, coming in July 2021.

This week SonicWall announced that it had recorded a staggering 116% increase during the first 5 months of 2021 over the same period last year — with May notching more ransomware attacks than any other single month on record.


Ransomware Gangs Say This Makes You a Target — SDx Central

Why Is Ransomware on the Rise? — The Markup

This week governments in the U.S. and U.K. geared up to fight back against the growing threat of ransomware.

Are you certain you are on the right side of defending against tomorrow’s APTs? — Everything Industrial

Security researcher says attacks on Russian government have Chinese fingerprints – and typos, too — The Register


Ransomware warning: There’s been another spike in attacks on schools and universities — ZDNet

With plenty of customers now running SonicOS 7.0, SonicWall Global Enablement has updated the SonicWall Network Security Administrator (SNSA) course to show you how to take advantage of SonicWall’s most advanced security operating system yet.

The SNSA training curriculum is designed to teach students specific SonicWall network security technology. The course will provide students with the skills to successfully implement and configure SonicWall firewall appliances and security services.

Enroll for the new SNSA for SonicOS 7 course now on SonicWall University.

SonicWall offers other training and certification courses to support the needs of our partners, customers and employees. These include:

Available to students who have achieved the SNSA certification, the SNSP course is designed to further enhance an individual’s network security technical skills.

In this two-day, instructor-led course, students will learn how to monitor, investigate, analyze and configure SonicWall NGFWs running SonicOS — as well as how to enable advanced functionality related to secure and remote connectivity, network optimization, and threat prevention.

Upon successfully completing the SNSP program, the students will be able to demonstrate SonicWall product expertise and the application skillsets required to mount a proactive, effective defense against current and evolving network and cybersecurity threats.

Successful completion of the SNSP curriculum qualifies the student to take the SNSP Certification Exam.

Why One Hack on One Firm Can Shake Global Meat Supply — Bloomberg
In the last three years, a fire, a pandemic and now a cyberattack have disrupted the U.S. meat industry. Here’s how one hack impacts the global economy.

U.S. schools land IBM grants to protect themselves against ransomware — ZDNet
All U.S. K-12 public school districts were eligible to apply for the grants, designed to help school officials “proactively prepare for and respond to cyberattacks.”

Cyber-Insurance Fuels Ransomware Payment Surge — Threat Post
Companies relying on their cyber-insurance policies to pay off ransomware groups are being blamed for a recent uptick in ransomware attacks.

Kenyan Arrested in Qatar First Targeted By Phishing Attack — Bloomberg
A Kenyan security guard writing compelling, anonymous accounts of being a low-paid worker there found himself targeted by a phishing attack that could have revealed his location just before his arrest, analysts say.

New Russian hacks spark calls for tougher Biden actions — The Hill
Officials are calling for harsher measures against Russia following reports that SolarWinds hackers were continuing to launch cyberattacks against U.S. government agencies and other organizations.

Interpol intercepts $83 million fighting financial cybercrime — Bleeping Computer
The International Criminal Police Organisation has intercepted $83 million belonging to victims of online financial crime from being transferred to the accounts of their attackers.

This Android trojan malware is using fake apps to infect smartphones, steal bank details — ZDNet
TeaBot malware tells victims they need to click a link because their phone is damaged with a virus  — then infects them via the link.

UF Health Florida hospitals back to pen and paper after cyberattack — Bleeping Computer
UF Health Central Florida has suffered a reported ransomware attack that forced two hospitals to shut down portions of their IT network.

Cozy Bear revisits one of its greatest hits, researchers say: election skulduggery — Cyberscoop
The recent spearphishing campaign uses an election fraud document as a lure. The emails purport to be from the U.S. Agency for International Development, and have targeted government agencies, research institutions and nongovernmental organizations.

SonicWall President and CEO Bill Conner discusses who is responsible for rising attacks on enterprises, governments and SMBs worldwide and what’s to be done with KRLD NewsRadio 1080 radio host Dave Johnson in a recent interview.

“We’re past the tipping point now in [the] arms race,” said Conner. “The new tools that the bad guys are using are the stuff we use as good guys. So, they’re now using the cloud to take terabytes of data and store it anywhere in the world.

“They’re using cloud applications to target [organizations], just like they did with SolarWinds, and now they’re taking advantage of Microsoft Windows and authentication. It is past an arms race at this point.”

Conner and Johnson go on to discuss what governments need to do to “go on the offensive collectively” to thwart sophisticated and increasingly targeted attacks. Through April 2021, SonicWall Capture Labs threat researcher recorded a 90% year-to-date increase in ransomware. In fact, April 2021 was the highest single month of ransomware ever recorded by SonicWall.

“[Attackers] are going after everything,” warned Conner. “The ones that you’re just reading about are the ones that they’re actually getting away with and getting through [systems] today. Tomorrow is another story.”

The two go on to discuss the cybersecurity industry’s pressing issues such as disclosure, legislation and the world-wide phenomena of ransomware attacks.

Listen to the full interview below.