SonicWall President and CEO Bill Conner was featured as part of an exclusive group of cybersecurity thought-leaders at The Chertoff Group Security Series Event, “AI, Threat Intelligence and The Cyber Arms Race,” on June 18.

Conner was flanked by Christopher Krebs, Director of Cybersecurity and Infrastructure Security Agency (CISA) in the Department of Homeland Security; Dimitri Kusnezov, Deputy Under Secretary for Artificial Intelligence & Technology, Department of Energy; along with panel moderator Chad Sweet, Chief Executive Officer and Co-Founder, The Chertoff Group.

Together, they took to the stage to discuss how AI solutions are being leveraged to prevent, detect and respond to the cyber threats attacking both critical public infrastructure and the private sector.

The wide-ranging discussion took on everything from election cybersecurity to self-driving cars, but was grounded by a focus on how AI is increasingly growing in importance when running cyber defenses in both the public and private sectors.

With this in mind, they looked at the increasing number of ‘have and have-nots’ in these areas with Conner pointing out that an underfunded agency or a small company simply doesn’t “have the resource — capital or human” to defeat a major cyberattack without AI-based cyber defenses such as SonicWall Real-Time Deep Memory InspectionTM (RTDMI) that can both detect and prevent existing and never-before-seen cyberattacks as they appear. 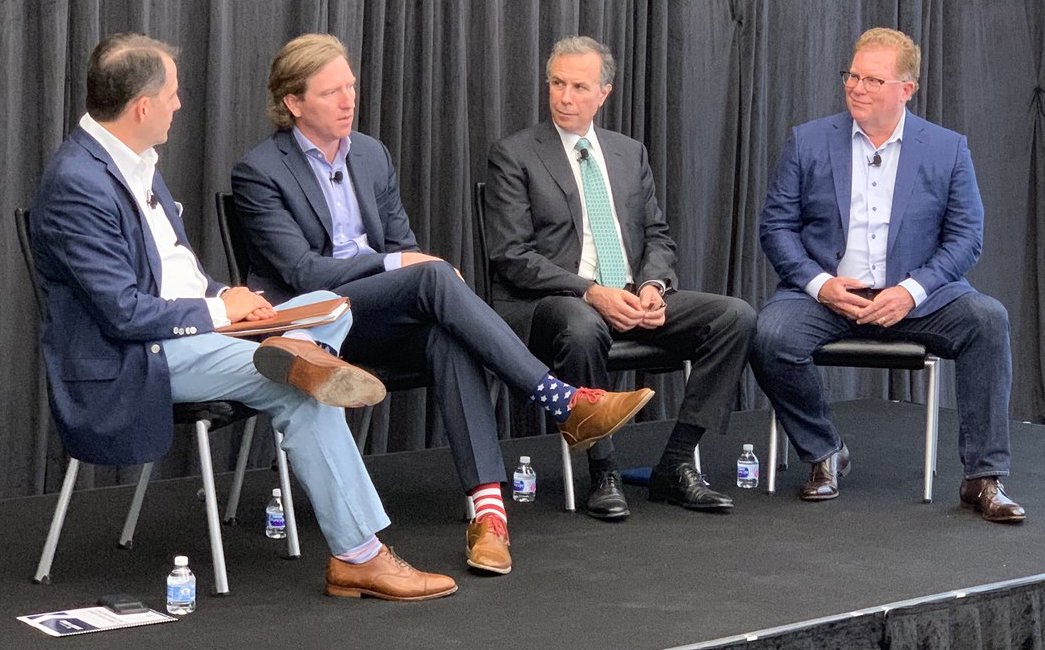 ‘It starts with the chip’

The conversation moved on to discuss current types of cyberattacks and how growth in 5G, while increasing exponentially, is leaving itself open to sophisticated state-sponsored attacks because the industry has still not fully agreed upon a security standard.

They agreed that in 2019 cybersecurity has to go all the way down to the supply chain and chip level, especially when considering ongoing controversies over alleged government influence on companies like Huawei, and confirmed tech problems like the side-channel vulnerabilities in Intel chips. In Bill Conner’s words, “It does start with the chip … because that’s everywhere.”

Watch the whole video (provided above) for the in-depth consideration of the threats posed by Internet of Things (IoT) growth, a lively Q&A session with the audience, and the astute observation that modern cyber threats are borderless and not bound by the same rules as other threats.

“Tariffs and borders are all interesting. They’re all the rage these days,” said Conner. “But cyber doesn’t care about that … we have to think differently … we learned how to fight air, land and sea, [now] we’re learning how to fight cyber.”

The Chertoff Group Security Series convenes CEOs, CSOs, CIOs, CISOs, COOs, General Counsels, senior agency leadership, and senior IT risk executives from both the public and private sectors. The forum welcomes technology and security leaders across a variety of industries whose operational business decisions are impacted by technology and are seeking insight on role of policy in today’s global technology business market.

This week, SonicWall is featured on Reuters TV, federal cybersecurity is found to be seriously out of date, and a young hacker is taking down Internet of Things botnets by bricking as many IoT objects as he can.

To Pay or Not To Pay: U.S. Cities With Ransomware – Reuters

The Hotel Hackers Are Hiding in the Remote Control Curtains – Bloomberg

A Firefox Update Fixes yet Another Zero-Day Vulnerability – Engadget

This week, it’s National Selfie Day, Facebook launches its cryptocurrency, and, as predicted by SonicWall, ransomware is all over the news.

Is AI Fundamental to the Future of Cybersecurity? – CSO Online

U.S. Cities Are Under Attack From Ransomware — and It’s Going to Get Much Worse – Vice News

Inside the FBI’s Fight Against Cybercrime – Dark Reading

In 2018, the City of Atlanta attack shut down over a third of 424 software programs with total damages expected to be over $40 million USD. This year, the City of Baltimore was targeted with multiple systems and agencies down. At the time of writing, the damage caused by the attack hasn’t been fully repaired and the bill is coming in at $18 million.

As much as people preach about segmenting networks, backing up data and improved network security, ransomware attacks are happening at scale with increasing ferocity.

IT administrators look for solutions and that quest usually involves security for the endpoint. Since a lot has changed in the world of endpoint security, administrators are exploring the options that fall into the endpoint detection and response (EDR) category.

“As much as people preach about segmenting networks, backing up data and improved security, ransomware attacks are happening at scale with increasing ferocity.”

Osterman Research published a research paper to outline the concerns, reasons and requirements admins on the front lines have with EDR solutions. Use this latest white paper to guide your organizations as you deploy your first endpoint protection solution or upgrade legacy antivirus protection.

The SonicWall Capture Client endpoint solution offers many endpoint detection and response (EDR) capabilities that give organizations the ability to mitigate attacks, remediate them and report back to the organization.

The current level of endpoint protection is not adequate against improving evasion tactics, end users who work outside of perimeter defenses, infected USBs, fileless attacks and others. Explore this exclusive Osterman Research paper, which frames the importance of advanced endpoint security.

This week, why businesses need layered cybersecurity, the “most dangerous hacking group” are eyeing up the US power grid, and inside the online leak of hours of sought-after Radiohead rehearsals.

These are the worst hacks, cyberattacks, and data breaches of 2019 (so far) – ZDNet

For Sale: Have I Been Pwned – Gizmodo

This week, there’s a new cybersecurity power couple as SonicWall and ADT announce a strategic partnership to protect SMBs, U.S. cities face a ransomware pandemic and the ‘invisible web’ is growing rapidly.

Hackers Won’t Let Up in Their Attack on U.S. Cities – The Wall Street Journal

Emotet Made up 61% of Malicious Payloads in Q1 – Dark Reading

Founded in 1874, ADT has long been synonymous with security. A new strategic partnership with SonicWall further expands the Florida-based company’s footprint into cybersecurity.

In a public release, “ADT Selects SonicWall as Exclusive Provider of Managed Cybersecurity Service Offering for SMBs,” the companies announced their plans to offer an exclusive managed security offering to small- and medium-sized businesses (SMB).

“The financial impact of a cyberattack can easily result in a company closing its door,” said SonicWall President and CEO Bill Conner in the official release. “As these threats evolve, so must the tactics we employ to protect organizations of all sizes. Their No. 1 focus should be on their business needs and operations, not on looming online threats.”

With SonicWall, ADT will deliver managed cybersecurity to SMBs much in the same manner as they simplify physical home security for the consumer market. This turn-key approach will make it easy and affordable for SMBs to protect their networks, data, email and brand — all for a single monthly price.

“For more than a century, ADT has been monitoring and responding to emerging threats for our customers. We will continue to do so with the help of cybersecurity pioneers like SonicWall … ”

“For more than a century, ADT has been monitoring and responding to emerging threats for our customers. We will continue to do so with the help of cybersecurity pioneers like SonicWall …,” said Jay Darfler, ADT SVP Emerging Markets.

“We look forward to working with a world-renowned security provider to deliver the necessary tools to protect our customers,” said Conner.