This week, SonicWall CEO Bill Conner is interviewed by on Federal Tech Talk, the potential of a 5G future is considered, and more details emerge about the Citrix data breach.

Cybersecurity: The Key Lessons of the Triton Malware Cyberattack You Need to Learn – ZDNet

The Terrifying Potential of the 5G Network – The New Yorker

It’s Game of Thrones season! And anything to do with dragons reminds me of GoT. The Dragonblood vulnerability recently exposed weak security of the WPA3 standard. It was just a year ago that KRACK exposed weaknesses in the WPA2 standard. In response, a stronger successor to WPA2 was announced by the Wi-Fi Alliance: WPA3.

But, was this really a strong successor as it was perceived? Apparently, no.

WPA3 incorporated Simultaneous Authentication of Equals (SAE) handshake, which was a huge improvement over WPA2 as it prevents dictionary attacks. The family of SAE handshakes is referred to as Dragonfly. This handshake is susceptible to password-partitioning attacks, which resemble dictionary attacks and leverages side-channel leaks to recover network passwords.

According to the researchers Vanhoef and Ronen, who published the paper on this vulnerability, WPA3 is affected by serious design flaws that could have been avoided with feedback from industry experts about secure WiFi. Among these flaws is the fact that WPA3 failed to introduce any new protocols, rather it only instructs which existing protocols should be supported.

WPA3 made enhancements over WPA2 using the latest security methods, disallowing outdated legacy protocols and implementing the use of Protected Management Frames (PMF). It was designed with two types of networks in mind: protection for home networks with WPA3-Personal and for enterprise networks with WPA3-Enterprise.

What is the Dragonfly handshake?

WPA3-Personal mandates the support of SAE handshakes, which is a balanced Password Authentication Key Exchange where two endpoints (AP and AP, or AP and client) store passwords in clear text. The input for the SAE handshake is a pre-shared secret and the output is a high-entropy Pairwise Master Key. After this execution, a four-way handshake takes place to generate a Pairwise Transient Key.

How to protect against Dragonblood

The Dragonblood vulnerability can be fixed with software patches. While the Wi-Fi Alliance is communicating guidelines to vendors, ensure that your network is always patched with the latest security updates from wireless device manufacturers. In combination, use strong passwords on your networks.

No. This vulnerability does not affect SonicWall wireless access points. The SonicWave access points provide superior wireless security and a dedicated third radio for security scanning. Advanced security services like the Capture Advanced Threat Protection (ATP) sandbox and Content Filtering Service (CFS) can be performed by the APs, even when they are untethered from the firewalls. It gives you the ultimate flexibility to manage wireless from the cloud or via the firewalls — without compromising security.

How To Streamline And Automate Your Wireless Network Management 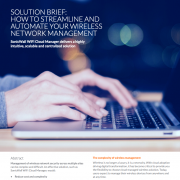