Despite price fluctuations of bitcoin and other cryptocurrencies, cryptojacking remains a serious — and often hidden — threat to businesses, SMBs and everyday consumers.

And the most covert of these threats is cryptomining via the browser, where popular forms of malware attempt to turn your device into a full-time cryptocurrency mining bot called a cryptojacker.

To help you creatively understand this trend, let me summon my classical training and be a little hyperbolic. If you see the cryptojacking wave as an apocalypse like some of their victims do, the Four Horsemen would be the four threats to your endpoint or business:

Unlike ransomware that wants to be found (to ask for payment), a cryptojacker’s job is to run invisibly in the background (although your CPU performance graph or device’s fan may indicate something is not normal).

Ransomware authors have switched gears over the past two years to use cryptojacking more, because a ransomware strain’s effectiveness and ROI diminish as soon as it ends up on public feeds like VirusTotal.

Like anyone else running a highly profitable business, cybercriminals need to constantly find new ways to fulfill their financial targets. Cryptojacking is being used to solve that challenge.

In April 2018, SonicWall started tracking cryptojacking trends, namely the use of Coinhive in malware. Over the course of the year, we saw cryptojacking ebb and flow. In that time, SonicWall recorded nearly 60 million cryptojacking attacks, with as many as 13.1 million in September 2018. As published in the 2019 SonicWall Cyber Threat Report, volume dipped across the final quarter of 2018. 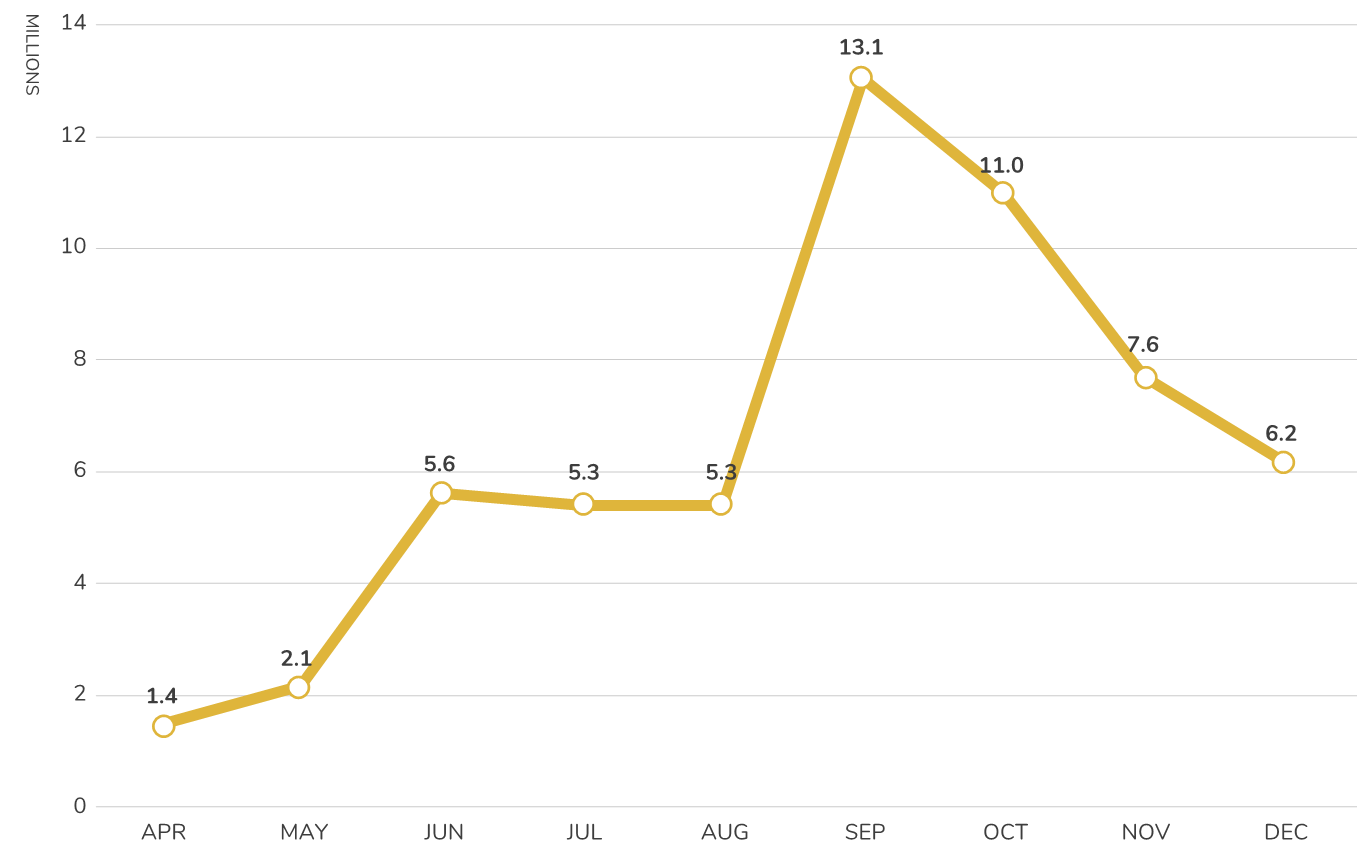 The lure of cryptomining

Cryptomining operations have become increasingly popular, now consuming almost half a percent of the world’s electricity consumption. Despite the wild swings in price, roughly 60% of the cost of legitimately mining bitcoin is the energy consumption. In fact, at the time of writing, the price of a bitcoin is worth less than the cost of mining it legitimately.

With such costs and zero risk as compared to buying and maintaining equipment, cybercriminals have strong incentives to generate cryptocurrency with someone else’s resources. Infecting 10 machines with a cryptominer could net up to $100/day, so the challenge for cryptojackers is three-fold:

Cryptojackers use similar techniques as malware to sneak on to an endpoint: drive-by downloads, phishing campaigns, in-browser vulnerabilities and browser plugins, to name a few. And, of course, they rely on the weakest link — the people — via social engineering techniques.

Am I infected by cryptominers?

Cryptominers are interested in your processing power and cryptojackers have to trade stealth against profit. How much of your CPU resources they take depends on their objectives.

Siphoning less power makes it harder for unsuspecting users to notice. Stealing more increases their profits. In either case, there will be a performance impact, but if the threshold is low enough it could be a challenge to distinguish the miner from legitimate software.

Enterprise administrators may look for unknown processes in their environment, and end users on Windows should spawn a Sysinternals Process Explorer to see what they are running. Linux and macOS users should investigate using System Monitor and Activity Monitor, respectively, for the same reason.

How to defend against cryptominers

The first step in defending against cryptominers is to stop this type of malware at the gateway, either through firewalls or email security (perimeter security), which is one of the best ways to scrub out known file-based threats.

Since people like to reuse old code, catching cryptojackers like Coinhive was also a simple first step. But in February 2019, Coinhive publicly announced it was ceasing operations March 8. The service stated that it wasn’t “economically viable anymore” and that the “crash” impacted the business severely.

Despite this news, SonicWall predicts there will still be a surge in new cryptojacking variants and techniques to fill the void. Cryptojacking could still become a favorite method for malicious actors because of its concealment; low and indirect damage to victims reduces chances of exposure and extends the valuable lifespan of a successful attack.

If the malware strain is unknown (new or updated), then it will bypass static filters in perimeter security. If a file is unknown, it will be routed to a sandbox to inspect the nature of the file.

The multi-engine SonicWall Capture Advanced Threat Protection (ATP) sandbox environment is designed to identify and stop evasive malware that may evade one engine but not the others.

If you have an endpoint not behind this typical set up (e.g., it’s roaming at the airport or hotel), you need to deploy an endpoint security product that includes behavioral detection.

A behavioral-based antivirus like SonicWall Capture Client would detect that the system wants to mine coins and then shut down the operation. An administrator can easily quarantine and delete the malware or, in the case of something that does damage to system files, roll the system back to the last known good state before the malware executed.

By combining a mixture of perimeter defenses and behavioral analysis, organizations can fight the newest forms of malware no matter what the trend or intent is.

Sr Product Marketing Manager | SonicWall
Brook handles all product marketing responsibilities for SonicWall security services and serves as SonicWall’s ransomware tsar. Fascinated in the growth of consumer internet, Brook dabbled in grey-hat hacking in the mid to late 90’s while also working and volunteering in many non-profit organizations. After spending the better part of a decade adventuring and supporting organizations around the globe, he ventured into the evolving world of storage and security. He serves humanity by teaching security best practices, promoting and developing technology.
https://d3ik27cqx8s5ub.cloudfront.net/blog/media/uploads/images/featured/Four-Horseman.jpg 500 1200 Brook Chelmo https://blog.sonicwall.com/wp-content/uploads/images/logo/SonicWall_Registered-Small.png Brook Chelmo2019-05-08 12:50:152019-05-08 13:03:10Cryptojacking Apocalypse: Defeating the Four Horsemen of Cryptomining