The launch of the annual SonicWall Cyber Threat Report always reminds us why we’re in this business.

Our engineers and threat researchers dedicate months to the project in order to shed light on how people, businesses and organizations online are affected by cybercrime.

What they found is telling. Across the board, cyberattacks are up. Criminals aren’t relenting. Hackers and nefarious groups are pushing attacks to greater levels of volume and sophistication. And the 2019 SonicWall Cyber Threat Report outlines how they’re doing it and at what scale.

To understand the fast-changing cyber arms race, download the complimentary 2019 SonicWall Cyber Threat Report. The unification, analysis and visualization of cyber threats will empower you and your organization to fight back with more authority, determination and veracity than ever before. So, let’s take a look at what’s included.

In 2016, the industry witnessed a decline in malware volume. Since then, malware attacks have increased 33.4 percent. Globally, SonicWall recorded 10.52 billion malware attacks in 2018 — the most ever logged by the company.

SonicWall Capture Lab threat researchers found that ransomware was up in just about every geographic region but two: the U.K. and India. The report outlines where ransomware volume shifted, and which regions were impacted most by the change.

Cybercriminals are weaponizing PDFs and Office documents to help malware circumvent traditional firewalls and even some modern day network defenses. SonicWall reports how this change is affecting traditional malware delivery.

Ports 80 and 443 are standard ports for web traffic, so they are where many firewalls focus their protection. In response, cybercriminals are targeting a range of non-standard ports to ensure their payloads can be deployed undetected in a target environment. The problem? Organizations aren’t safeguarding this vector, leaving attacks unchecked.

There’s a deluge of Internet of Things (IOT) devices rushed to market without proper security controls. In fact, SonicWall found a 217.5 percent year-over-year increase in the number of IoT attacks.

The growth in encrypted traffic is coinciding with more attacks being cloaked by TLS/SSL encryption. More than 2.8 million attacks were encrypted in 2018, a 27 percent increase over 2017.

The Rise & Fall of Cryptojacking

In 2018, cryptojacking diminished nearly as fast is it appeared. SonicWall recorded tens of millions of cryptojacking attacks globally between April and December. The volume peaked in September, but has been on a steady decline since. Was cryptojacking a fad or is more on the way? 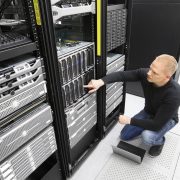 Ransomware: Are You Protected From the Next Outbreak?
0 replies